The Schwaben Dancers are an energetic, Germanic folk dance group who love to entertain and electrify their audience.  Their dances draw on their ancestral cultural origins from the Rhine region and blend them with the regional influences of the Danube River Basin.  A plethora of artistic infusions from the Alps skirting the Carpathians across the northern Balkans to the Black Sea molded this distinctiveness.  The cultural richness is further enhanced by several centuries of Hapsburg influence.  In the past, they have travelled as far as Germany and Hungary to demonstrate and learn about their culture.  In Ulm, Germany, were co-participants at the opening celebrations of the Donauschwäbisches Zentralmuseum in the year two-thousand.  Journeyed to competitions and gatherings in Los Angeles, Chicago, Cleveland, Milwaukee, Philadelphia, Detroit and most recently Cincinnati.

They perform numerous times throughout the year, at many different locations and events.  Locals closer to home include Niagara Falls, Orillia, Toronto, Windsor, Leamington, Delhi and Collingwood (just to name a few). They have performed at Casino Rama, the main stage at the Vancouver Olympics Torch Relay 2010, and at the Toronto Waterfront Festival: Tall Ships Challenge.  They are especially busy during Kitchener-Waterloo Oktoberfest, North America’s largest Bavarian festival, where the Schwaben Dancers perform through-out the region — and march in Canada’s greatest Thanksgiving Day parade.  Finally, to end the year, volunteering to perform at the Kitchener Christkindl Market.

If you are interested in joining or wanting to book the dance group for a performance, please contact the Schwaben Club at 519-742-7979.

Dance practices take place Sunday afternoons, from 3:30 – 6:00 pm at the Schwaben Club. All are welcome!

In addition to a classical repertoire they have a selection of non-traditional choreographed compositions.  By merging long-established steps and patterns with contemporary music they demonstrate a variety of styles and tempos.  From the leisurely and uncomplicated to the nimble and intricate, a group engaged in extending the horizons of folk dance.  Having experimented early with dancing traditional steps to contemporary music, whether it be to DJ Ötzi or Rammstein, they have built a reputation of excellence with both German and non-German audiences. 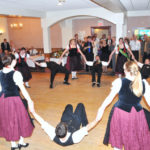 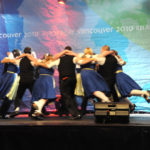 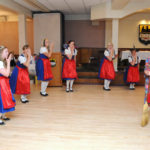 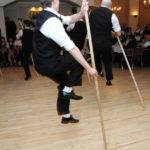 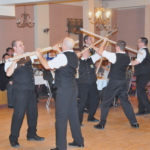 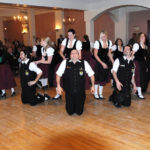 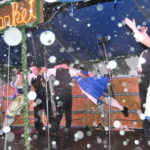 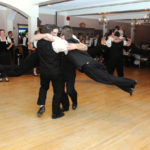 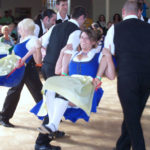 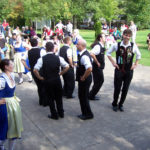 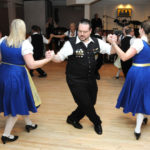 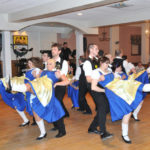 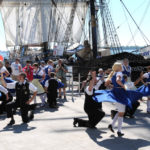 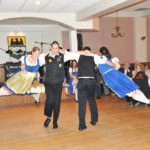 The Men’s ‘Tracht’ is typical for many cultures in the region.  It consists of a black vest with silver buttons and black pants.  The modest ensemble is completed with a white shirt (with the sleeves rolled up above the elbows for performances) and black shoes.  The vest also bears the cultural emblem in the form of a crest specific to our club.  Individuals also have the option to decorate their vests with pins.

The Ladies’ ‘Dirndl’ is the standard costume for performances. It consists of a black bodice with an aubergine skirt.  Accenting trim lines of the outfit an aubergine rope with black and aubergine ruffle. Under the dirndl, a white cotton blouse is donned and petti pants (bloomers).  The apron worn over the dirndl is an aubergine satin with black lace tied in the front, on the left side.  The side the apron is tied on determines their marital status.  The dirndl is worn with white ‘trachten’ socks and black character shoes with 1-2″ heels.  Ladies also have the option of decorating the top portion of the dirndl with pins.

An exquisite piece, the Ladies’ ‘Tracht’ is worn for more formal occasions and performances.  Culturally defined by the region of origin the ‘Tracht’ varied in style from village to village.  The last version consisted of a burgundy skirt worn with a black lace apron tied in the back.  Under the skirt, there are two starched white petticoats to add additional fullness.  On top, a black velvet vest with a white cotton blouse is worn.  The decorative shawl, white ‘trachten’ socks and black character shoes finish this costume.

The Schwaben Dancers are run by an elected Committee. Each position (excluding the Instructor) has a one-year term, and is re-elected every year.  Committee Members for 2023 are as follows:

It is always an honour to find out when you’ve done a good job for the people that have hired you to perform for their events. Click on the images below to see what past organizers have said about the Schwaben Dancers after we had performed for them. 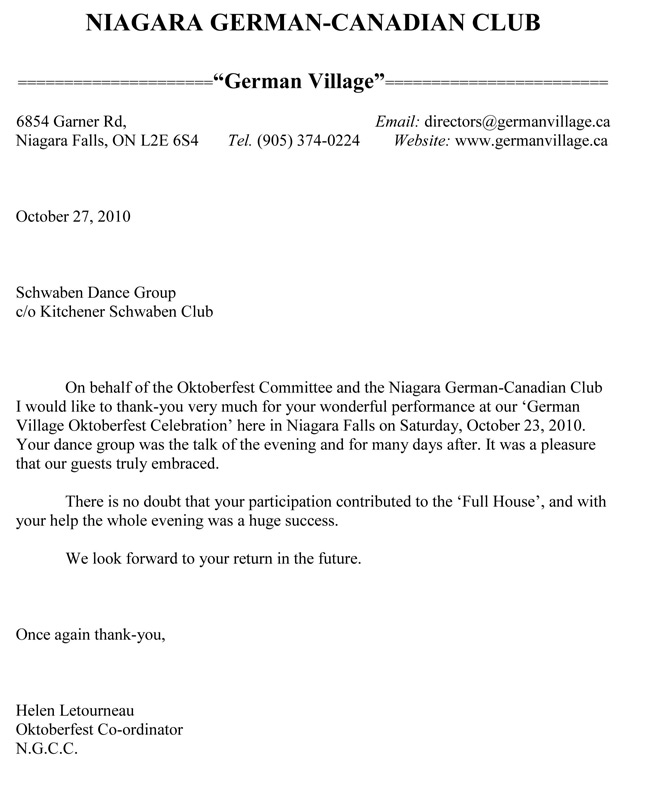 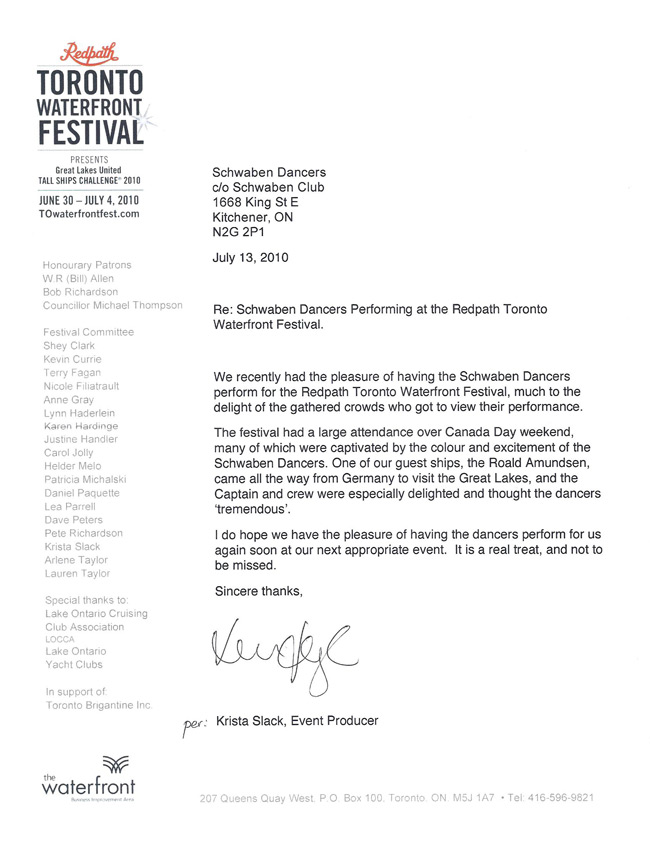 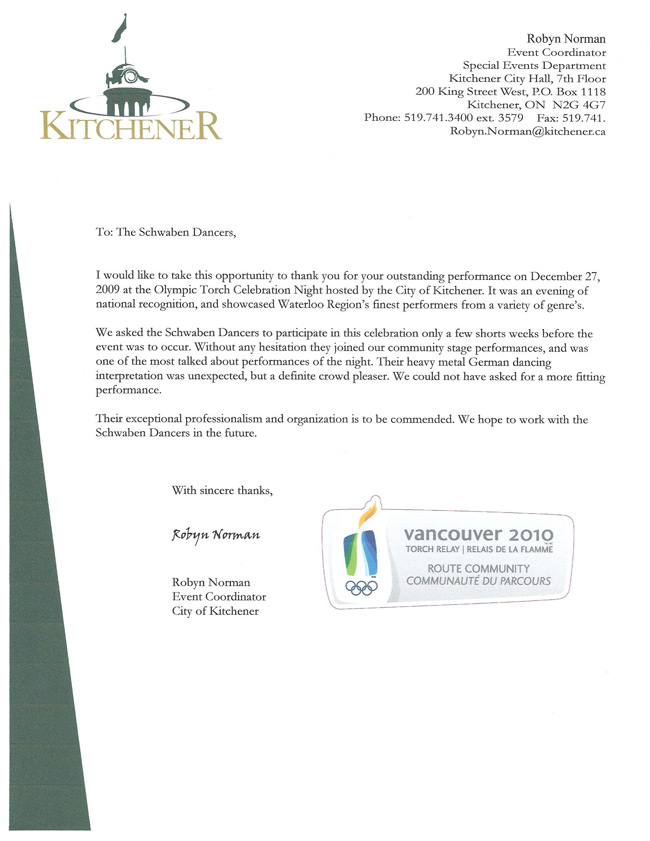 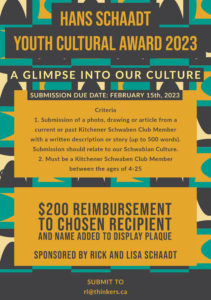 For our youth: Get your submissions started!

Winner will be announced Feb 2023 at our club’s Grundungsfest!